For several reasons, it is very important that you learn the rudiments of chord structure.

First, it will provide you - in conjunction with your knowledge of scales - with a basis for improvisation (solo work), no matter what instrument you play. Second, it will enable you to work out chords for your own songs (applicable to any instrument capable of playing chords). Third, you can work out chords from a recording without being given the written music. Fourth, the chords will form the basis of harmonies for voice or instruments. Fifth, it will provide you with the raw materials to understand chord substitution.

The formulae for the chord structures of the most important chords are outlined in the following table. They work exactly the same as any scientific or algebraic formulae. Just decide what chord you want to work out, find the relevant formula in the chart, and fill in the unknown quantities from the major scale.

Since the simplest scale to refer to is the C major scale, all examples given have been derived from it. But all you need do to work out any other chords is apply the same formulae to the relevant major scale. 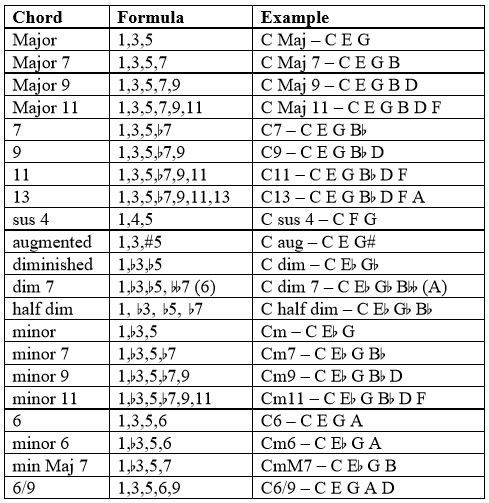 For instance, if I wish to work out the F9 chord, I begin by writing out the F major scale with its scale degrees:

If we want to work out Dm7, we follow the same procedure, beginning with the D major scale and its scale degrees:

Notice that the 3rd and 7th in D major were already sharpened. To flatten them we merely take away the sharps making them F and C respectively.

For more information on contemporary music theory, buy Contemporary Music Theory. (This link will take you to Createspace.com, a subsidiary of Amazon.)