The blues feel is obtained largely by the use of "blue" notes. There are three blue notes; the flattened third, flattened fifth and flattened seventh of the major scale. Thus, in the key of C, the blue notes are E♭, G♭ and B♭. You will see from the following that E♭ and B♭ are both contained in the CmP scale:

If we now add the G♭ to the pentatonic scale, we end up with the six-note blues scale:

Blues scales can be used in most places where a minor pentatonic scale would be suitable. Here is a table showing the notes of the blues scales: 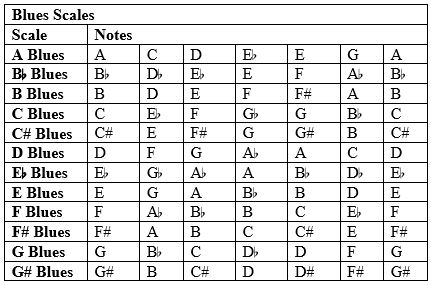