The simplest scales are the pentatonics (five note scales), and the two chiefly in use in contemporary music are the major pentatonic and the minor pentatonic.

At this point, you might be wondering: If they have exactly the same notes, why do they have two different names? So now might be a good time to talk about tonality.

Tonality refers to the tendency of most music to gravitate back to the tonic note of the key in which it's written. For example, in the key of C major, a melody will, under normal circumstances tend towards the tonic note, C – we could also call it the home note.

Now play the C major chord for a few bars followed by the C major pentatonic scale. Notice that the scale has a tendency to come to rest on C. (Try stopping on A, and although it doesn't clash, you can tell it isn't the home note.)

If you repeat this procedure playing the A minor chord followed by the A minor pentatonic scale, you'll find that the scale wants to end on A. (Again, try stopping on C, and although it doesn't clash either, it obviously isn't the home note.) Thus, even though the scales contain the same notes, the tonic notes are different, and therefore the scale names are also different.

The following is a table of the major pentatonic scales: 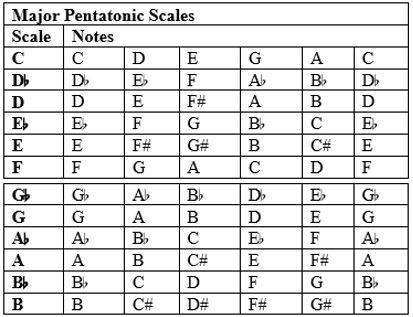 The following is a table of the minor pentatonic scales: 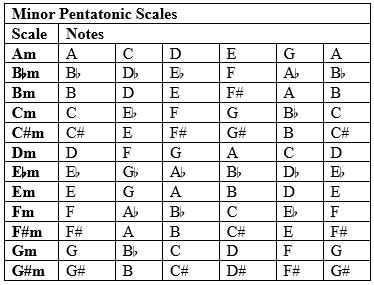